The little village of Swiss was built on the uplands south of Hermann on the Old Iron Road. Five families from Switzerland had settled here and given the town its name. The general store and St. John’s Church were on one side of the road and the blacksmith shop was on the other side; thus, farmers and travelers could have their horses shod while shopping and visiting. Country stores were the center of commerce and farm life at the turn of the century. They carried everything that might be needed by the country folk who came to purchase necessities, to pick up their mail, and to visit. South and west of Hermann were several similar little hamlets with country stores and churches.

The Swiss Country Store was operated by many families throughout the years. It was in May of 1965 that Bill and Margie Sloan moved their family from St. Louis County when they purchased the Swiss Country Store from Margie’s parents, Ervin and Velma (Fiegler) Rauter. Bill, a former meat market manager, began to cut meat and manufacture sausage in the country store. Bill and Margie operated both the Swiss Country Store and Service Station, as well as raise their five young children. He added a walk in cooler and a small processing room in the store when he began to process beef and hogs for the local farmers.

As his processing business grew, Bill realized the need to expand or build in order to keep up with the demand for his German Sausages. Bill and his new business partner, Leroy Epple built and opened the Swiss Processing Plant Inc. in October of 1969 for the purpose of butchering animals for the local farmers. It wasn’t long before Bill saw the need to expand the meat business and they bought out Leroy in 1973 and proceeded to double the size of the operation by adding more cooler space, a larger retail area and two more smokehouses. 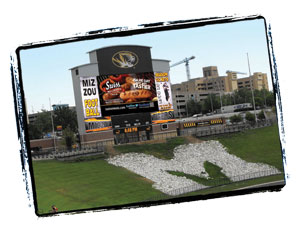 Bill was always looking for new opportunities, and his foresight led to the beginning of a successful catering operation in 1976. In 1997 the size of the operation was doubled by adding a warehouse, a packaging room, additional cooler space, a sausage kitchen, and another smokehouse. There was also an upgrade of equipment to remain competitive and to diversify their operations; which then included wholesale, mail order, deer processing, and private labeling as well as custom processing, retail sales, catering, exotic meat sales, and State and National Champion Smoked Meats and Sausages. 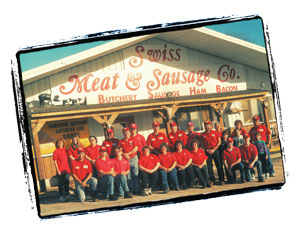 Bill and Margie semi-retired from the business in 1998, but were still working as the catering coordinators, and helped out wherever needed. They had passed the responsibility of running the company over to their five children. Tragedy struck the family on November 5, 1998 with the sudden and unexpected passing of Margie at the age of 62. In May of 2006, the Sloan family was very fortunate to host Jamie and Bobby Deen (son’s of Paula Deen), along with their production crew as they filmed an episode of “Road Tasted” featuring the Swiss Meat and Sausage Company and their award winning sausages. This segment aired on the Food Network Channel and was well received by the viewers. The Sloan family made the decision the fall of 2006 to finally begin construction of a much needed, larger retail store, which included an antique kitchen and bratwurst sample bar. A new sausage kitchen and more freezer space was also included in the addition. 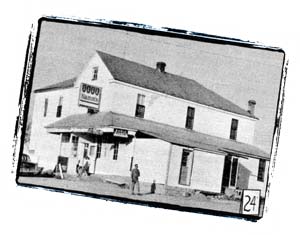 Fast forward to May of 2011, Swiss Meat and Sausage Company was announced as the supplier of the “Official Bratwurst of Mizzou Athletics, with their bratwurst being sold at all athletic venues at Memorial Stadium and Mizzou Arena. Their award winning meat and sausage can be found in numerous venues not only in Missouri but across the nation. The rest of the story: A large part of recent growth has been producing brats and link sausages for wholesale customers and distributors like the 25 Dierbergs Stores in the St. Louis/Illinois areas and Packers Distributing Company from Springfield, Mo. Private labeling has been the fastest growing segment of our business. Farmers and Ranchers have discovered that their profits are greater if they raise and market their own non-typical breeds of pork, beef and lambs directly to the consumers. They are in need of USDA meat plants to do the processing and labeling for them. This is where Swiss Meats comes in. We are fortunate to have some extremely faithful, private label customers who highly recommend our services to others. Two recent building expansions in 2015 and 2016 house the additions of a new freezer, a new shipping/warehouse area, and a new three truck smoke house. These additions greatly increased the production capabilities of the plant.
Recently Viewed
No recently views items
Clear All
Copyright © 2021 Swiss Meat & Sausage Co. All rights reserved.